This section of the gallery displays cases in which some or all of the patient's teeth were missing. In these cases, traditional removable full or partial dentures were used to restore form and function to the patient.

This patient had severe gum and bone problems, which required the removal of all of the upper teeth except for the two front teeth.

A removable partial denture was made that closely matched the remaining front teeth. The result a significant improvement in his appearance. 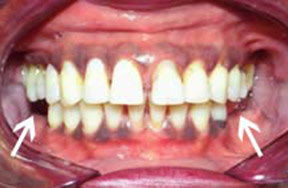 This patient was missing the bottom molars on both sides of his mouth, as indicated by the white arrows. 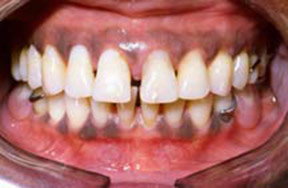 A removable partial denture was made to restore lost chewing surfaces. 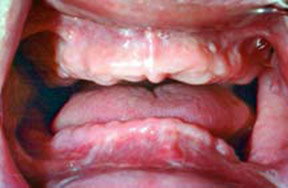 This patient is missing all of his teeth. A traditional full denture is needed. 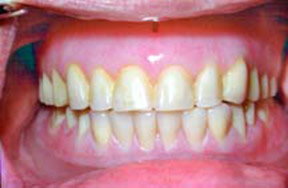 Dentures are made more realistic by making them slightly less than perfect. 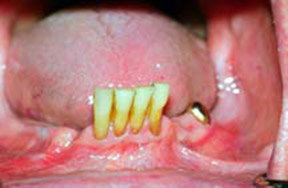 This patient lost all of her teeth with the exceptions of the front four teeth on the bottom and a portion of a tooth, which has a gold crown on top of the root (bottom right of the photo). It is important to save the root of a tooth because it helps preserve the bone, which is critical. 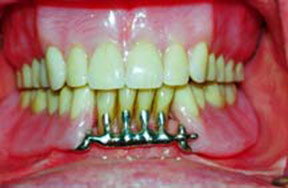 The metal holding the partial denture in place is not visible when the patient speaks or smiles. 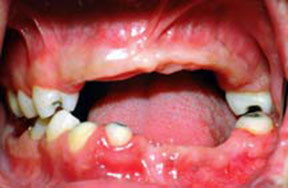 This patient had a developmental defect that caused a malformation of the jaws as well as the teeth. 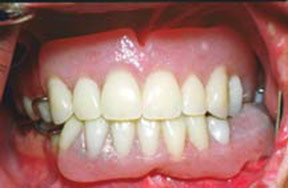 A removable partial denture was made for both the top and bottom to replace the missing teeth and to restore the aesthetics. 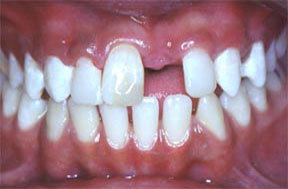 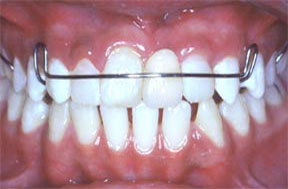